Ten years before the events of the film, an unknown bomber sets up Rachel Ellenstein's death. Devastated, Connor leaves his kinsman Duncan behind, and departs for The Sanctuary. Here, surveillance by a subgroup of Watchers, Immortals seclude themselves from the world, in an attempt to escape The Game. Unbeknownst to them, the Watchers use this method to prevent The Prize from being won.

While in The Sanctuary, Connor experiences a flashback to 1555 AD, where he is forced back to his former home in Glenfinnan, Scotland, to save his mother from his former friend and village priest Jacob Kell (Bruce Payne). Temporarily imprisoned, Connor forcefully watches as Kell burns Connor's mother on the stake for witchcraft. Having escaped shortly after Connor kills both Kell and his adopted father, Father Rainey, and accidentally sets Glenfinnan ablaze. Reborn as an immortal, Kell vows vengeance against Connor, spending the next four centuries killing people Connor cares about. Kell soon amasses great power by ignoring the rules of The Game, and recruits several lesser Immortals as disciples, who gang up against other Immortals so Kell can take their heads.

In the present time, Kell and his disciples attack the Sanctuary, and Connor is believed to be beheaded along with the other Immortals there. Duncan MacLeod (Adrian Paul), compelled by a vision he has of the slaughter, begins to investigate by visiting Methos, who tells him about the Sanctuary. Unwilling to believe Connor would willingly leave The Game, Duncan departs for New York, where he goes to Connor's loft, which was mostly destroyed. Sensing an Immortal, he turns to see Kate (Lisa Barbuscia), his wife from 200 years before.

Next, Kell's posse arrives, revealing Kate a part of them. Once again disregarding the rules of The Game, Kell's entire posse attacks Duncan simultaneously. When Kell arrives, the fighting stops, save for Carlos, who shoots Duncan, who is thrown out a window by the impact, and falls on a spike, killing him. Infuriated with this insubordination, Kell beheads Carlos. As the Quickening begins, a van drives up to where Duncan fell, and takes him away.

Sometime later, Duncan revives, only to realize he has been taken by Watchers, who intend to create a new Sanctuary out of forcefully taken "volunteers", to make sure The Prize cannot be claimed by any immortal. Soon rescued by Methos and Joe, Duncan discovers Connor was spared by Kell, to allow the evil Immortal to make his life even more miserable by continuously killing his loved ones, including a now targeted Duncan. Connor, too guilt-ridden by the deaths of all his loved ones, cannot stand up to Kell alone.

Duncan later confronts Kate, now known as "Faith," at a fashion shoot, and asks her why she is with Kell. Revealing how much she hates the fact that she will never have children or grow old and die, believes that Kell understands her pain. She then forces Duncan to earn her forgiveness, or face her as an embittered part of Kell's faction. That same evening, Kate arrives after a conversation with Kell, and makes love to Duncan. Feeling she has forgiven him, Faith quickly denies this claim, saying she would never be able to do so. Duncan then retorts by telling her it is never to late for redemption, and that he will wait, if it takes years or centuries.

Sensing an impending confrontation with the MacLeods, Kell executes his group in a mock Last Supper to gain their powers. Aware of his ever growing powers, Connor convinces Duncan that he must be beheaded in order for Duncan to gain enough power to rival Kell. After an emotional goodbye, Duncan follows Connor's advice, and beheads his beloved clansman.

Soon after, Duncan and Kell engage in a final battle. At first, Kell easily overpowers Duncan, even when MacLeod attempts a supposedly-unbeatable sword move that Connor taught him centuries before. Just before Duncan's impending death, Connor's soul emerges, distracting Kell, and allowing Duncan to somersault Kell, decapitating him as he turns around. Unleashing the quickening, Duncan absorbs all of Kell's power.

Finally, Duncan travels toGlenfinnan, Scotland to bury Connor next to his first wife Heather MacLeod, and mentor Juan Sánchez Villa-Lobos Ramírez. Back home, it is revealed that Kell had spared Faith. Calling herself "Kate" again, the two Immortals rekindle their romantic relationship, and kiss.

It was rumored that the movie went into development while the sixth and final season of the Highlander television series was in production.

The titles of the various drafts included Highlander IV: The Immortals, Highlander: The Search for Connor, and Highlander: World Without End. Gregory Widen, writer of the original Highlander, worked on the early drafts and was in talks to direct the film.

The movie was meant to act as a bridge between the Highlander television series and the spin-off series Highlander: The Raven that was continuing on TV in 1999. But these plans started to go awry when The Raven was cancelled due to low ratings, and the change in syndication, as well as production delays started occurring due to cast-availability problems. Dimension Films, which took on the project as a way of reinvigorating the franchise, realized that its plans for the film were not going to meet expectations, and scaled back on its release.

Filming began on October 22, 1999, and ended on March 7, 2000. Much of the filming happened in Romania, which was opposed by the producers.

Earlier drafts of the script differed greatly from the final cut in several aspects. The character of Kate was originally named "Alexis," and most of the flashbacks occurred in Shanghai, China instead of Ireland. Methos and Duncan were living in Paris, rather than London, as they did in the end of the TV series. Hugh Fitzcairn and May Ling Shen were to appear in the Shanghai-flashbacks.

Adrian Paul, Peter Wingfield, and Jim Byrnes reprise their roles from the series, as did Sheila Gish and Beatie Edney from the original 1986 movie.

Billy Idol and Jean-Claude Van Damme were considered for the role of Jacob Kell before Bruce Payne was cast in the role. Juliet Landau was in the running for the role of Kate/Faith.

Dimension Films, which was the film's distributor, demanded that cuts be made to the film to give it a faster pace. The deleted footage contained a more concrete exposition necessary to understand the Highlander universe, especially for new fans who were not familiar with the franchise. The theatrical cut was heavily criticized by critics and fans, who felt that the story was terribly interpreted.

The producers of the film disagreed with Dimension Films over the running-length and story structure of the film. They were unsatisfied with the theatrical cut, and upon its DVD release, they re-edited the film and added twelve minutes of new footage, which included;

The DVD release features a 101-minute "producers' cut", which features improved visual effects, sound mixing, and color-timing, and restores numerous scenes of exposition intended to make the story more easily understandable for audiences unfamiliar with the Highlander franchise. The Producers' Cut includes the "Kate Lives" ending, and removes the line of dialogue in which Methos refers to the Sanctuary as Holy Ground, which was criticized by fans, due to continuity issues.[6]

The Region 1 (United States and Canada) DVD includes, as a bonus feature on the second disc, a rough workprint cut of the film. The visual quality of the rough cut is rather poor, with unfinished special effects and a timecode visible at all times, and alternating between widescreen and full-screen. This cut features a subplot involving Connor giving a Christmas tree to an orphanage every Christmas, an activity picked up by Duncan after Connor's death. Kate does not appear in this version's conclusion, unlike the Producers' Cut included on the DVD. The rough cut also notably features an extended version of the "Last Supper" scene, in which Jin Ke plunges his sword into a wall and beheads himself after realizing that he cannot beat Kell, thereby denying Kell the opportunity to kill him. In the other versions of the film, this scene was edited to make it appear that Kell beheads Jin Ke (off-screen) along with the rest of the group.

The Region 2 (Europe) DVD includes the same Producers' Cut as the main film, and includes, on the second disc, an "Earlier full length 100min cut," which is actually the theatrical version, with an 84-minute runtime. This version features the scene where Methos refers to the Sanctuary as "Holy Ground."

Critical reaction to Highlander: Endgame ranged from mixed to negative, mainly during the theatrical release. It holds a 12% "rotten" rating on Rotten Tomatoes, based on 52 reviews, higher than Highlander II (0%) and Highlander III (5%), [7], and a score of 21 out of 100 on Metacritic, based on 37 reviews.

Elvis Mitchell of The New York Times gave Endgame a mildly positive review, saying: "It's nice to see mindless violence back in a B picture, where it belongs, and the swordplay is impressive. When [the movie] sticks to the hand-to-hand battles and doesn't try to offer deeper thoughts on the life of an immortal, it works on its own terms. IGN gave Endgame a score of 8 out of 10, saying that "fans will be pleased," adding: "Endgame proves to be both true to the spirit of the first film and the television series, [it has] a solid story to tell, [and it] features the best fight sequences of the series. Andrew O'Hehir of Salon.com said, "Personally, I enjoyed it about the way I enjoyed the Mortal Kombat movies, meaning that its genuine fun and its unintentionally ridiculous moments are roughly in balance. Lisa Schwarzbaum of Entertainment Weekly remarked: [Fans] will be thrilled that Connor MacLeod and his fellow clansman Duncan MacLeod engage in a vein-popping showdown to see which immortal will bump off the other, thereby achieving a quickening of vast proportions. Those who aren't in the cult of this popular genre fantasy not only won't understand what the previous sentence is about, but may also wonder what's so great about perpetual life if it entails schlepping from one badly lit, cheesily art-directed, peat bog-colored century to another, spouting hollow dialogue. Travis Eddings of Film Threat gave the film one half star out of five, saying: "After viewing Highlander: Endgame, it's obvious that Aarniokoski has no idea how to make a film. ... The only reason why this film earns one-half of a star instead of zero is due to some unintended laughs. It's funny to see what passes as acting in this movie.James Brundage of FilmCritic.com gave the film one and half stars out of five, saying: "Highlander: Endgame possesses all of the elements of a straight-to-video action movie. Cheap special effects that look cool, weak characters that still pull heartstrings, and a bunch of actors no one really knows unless you have seen this or that obscure flick. And, taking that view, one wonders why the hell I even had to watch Highlander: Endgame in theatres.

Carlo Cavagna of About Film called the film "a disaster," adding: "The plot and the characters' motivations are nonsense. Lambert's character has nowhere to go, and his once-magnetic glower is tired and worn. Several opportunities for spectacular action are squandered because the movie's villain has a tendency to execute summarily his own henchmen. Paul's modicum of charisma, director Douglas Aarniokoski's broad panoramas that recall the original Highlander, and Lambert's amusing skirmishes with a Scottish accent are not enough to provide any redeeming value.

Critics on the one hand praised Bruce Payne's performance in the film. One reviewer said of Highlander: Endgame that "the one in the cast that seems to be having the most fun is Bruce Payne. Traditionally Highlander villains give performances that go completely over-the-top and well into the stratosphere. Payne contrarily gives a performance where he enunciates every syllable with relish and dramatic weight, resulting in a performance that is entirely captivating whenever he is on screen.

Mathew lets the watcher know the duncan is on the 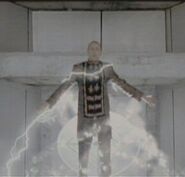